After reaching an all-time high on February 19, the S&P 500 has quickly recovered much of the sudden and steep drop, the depth of which was reached on March 23.  A closer look at the industry groupings, represented by iShares funds for each sector, shows a market driven largely by technology stocks. 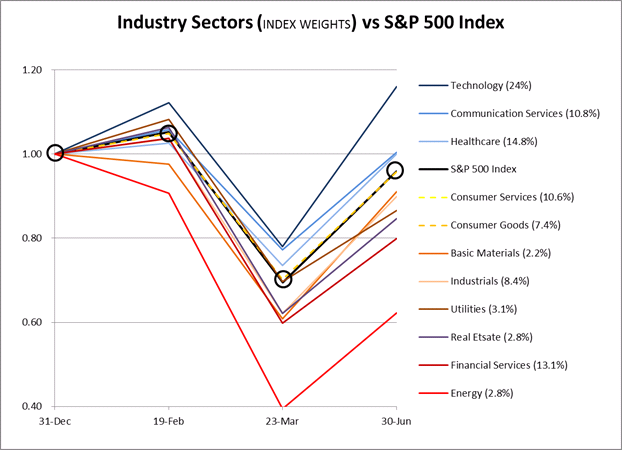 The strongest results have come from Technology, which represents about 24% of the S&P 500 index, enjoying an almost 16% positive year to date return as of June 30, 2020.

Breaking even after suffering a less severe drop in the first place, Healthcare and Communication Services, which also includes companies like Alphabet (GOOG) and Facebook (FB), collectively represent about 25.6% of the S&P 500 index.

Matching the return of the S&P 500 index, Consumer Goods, which include household items, and Consumer Services, which also includes e-commerce retailers like Amazon (AMZN), represent about 18% of the index.

At the stock level, a literal handful of the very largest stocks have contributed substantially to the S&P 500 index recovery.  We found this chart in The Wall Street Journal article dated June 25, 2020 titled COVID 19 Is a Puzzle That Wall Street Can’t Solve.  Each dot represents one of the 500 stocks in the S&P 500.  The horizontal axis plots the weight of each company in the index, on which, Facebook (FB), Alphabet (GOOG), Amazon (AMZN), Apple (AAPL), and Microsoft (MSFT) stand out as the largest components in the S&P 500, collectively representing 21.6% of the index. 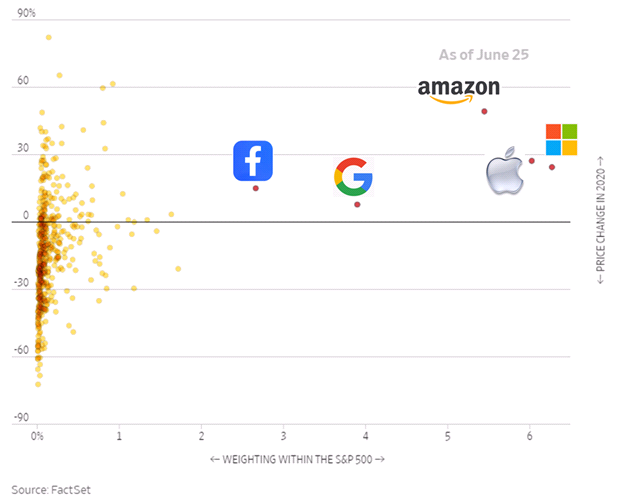 Return for each company is plotted on the vertical axis, showing that roughly three out of four stocks in the S&P 500 have fallen in value during COVID-19.  Because the S&P 500 is weighted by company size, gains from these five larger-sized companies have a far greater impact on the indexes' return.

As investors crowd into a small number of areas, the disparity between them has widened.   Ultimately, as the saying goes, trees don’t grow to the sky, and we expect investor sentiment will eventually broaden.  Buttonwood believes diversifying across industries allows investors to participate in opportunities throughout the economy, and helps to protect against being overly exposed to few areas that could derail your financial plan.

Thank you for your trust and confidence.